What is an Aerospace Engineer? 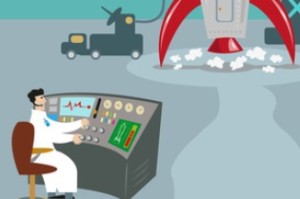 To better understand the job you must first understand the field. aerospace engineering is the primary field of engineering that deals with the design, construction, testing, maintenance and research of spacecraft and aircraft with other words their development. To be honest is a very challenging and mindset field that will introduce you to a whole new world of advanced concepts of mathematics, physics, and other.

An aerospace engineer is one of the specialists that tests prototypes just to make sure that they are functioning in the same line with the design. These professionals are responsible for the earlier mentioned methods in the field of engineering. Some of the aerospace engineers are working on projects that are related to national defense and also those that require security clearances.

Job Description of an Aerospace Engineer

The role that an aerospace engineer has is linked with engineering design, construct and test of satellites, aircrafts, spacecraft, and missiles. In these fields, they usually develop brand new technologies and design various new types of aerospace products. Their jobs also involve receiving a lot of projects proposals and then evaluate them for various factors. For instance, they are the ones that will determine if the projects can technically be possible, safe, and if the financial status will allow it.

Some other principles that these experts guide themselves by are determining if the product will fulfill and meet up the needs of the customers or not. Then they check if the product can surpass the environmental challenges, and if it will reach and meet the engineering principles. The next step that is to follow once they’ve approved a project is to be in command of coordinating the design and manufacturing of the product. They are also responsible for the final testing of the product, and that the project will fulfill the quality standards.

In the case of any breakdown or damage of the product, aerospace engineers must identify the problem and find any possible solution. They are specialists in various types of products, such as commercial or military products, rockets, launch vehicles, and other. To be more specific there are two types of aerospace engineers, ones are the aeronautical engineers that operate with aircrafts, and the others are the astronautical engineers whose work are with spacecraft.

Since they work with many other specialists, they must possess a variety of skills including communicating skills that in a team will lead to reaching that common goal, business skills, critical thinking and analytical skills.

How to Become an Aerospace Engineer?

If your dream is to become an aerospace engineer, then you should know that this career path is one of the most challenging in the field of engineering. You’ll go through a special academic training and qualifications, learning advanced mathematics and physics concepts, while you’re at the university. All this process of becoming an aerospace engineer starts right from the high school so make sure that you earn knowledge on subjects such as math, in which there is included trigonometry, algebra and calculus and in physics, chemistry and other.

This part of field requires that you possess a great educational training level in advanced physics, mathematics, numerical method skills, and great special abilities. However, the foundation for these skills and abilities are developed in high school.

The next step is to obtain a degree in aerospace engineering by enrolling in a university that has an ABET accreditation. For more options, make sure that you apply as many universities as possible. The barrier will be that there are not that many that will provide you with a degree of aerospace engineer. Still you can always take into consideration other engineering disciplines such as civil engineering or mechanical engineering.

The training programs for a bachelor’s degree include a combination at some point between classroom, laboratory and field subjects in general engineering principles, mechanics, stability and control, aerodynamics and other.

Once you are in your second year at the university, you can take into consideration a Co-op or an internship position. This will be a step further since you’ll be in touch with technical aspects that arise in this job and you’ll have the opportunity to see the environment of this profession. It will definitely make a difference for many employers, and you’ll earn the possibility of very good professional references.

You’ll find out that there are some universities where as a student you can enroll in the 5-year of your study that will lead you to completion to earn both a bachelor’s and a master’s degree. Upon graduation, you’ll have the opportunity to work at the University as an instructor or do research and development.

Another tip that will help you is to keep in mind that a Master’s degree will definitely lead you to earn higher income but at the same time you’ll have to be aware that the academic masters work does not represent the concepts of the real work. The danger that might arise here is that many students with a master’s degree can create a misplaced idea of their capabilities to the company as well as worth.

However in the end they are able to put the academic concepts in accordance with the reality in which they are working in. It is necessary to change your mindset and make all the necessary accommodations that will fulfill the needs of your employer.

The work environment for aerospace engineers involves many times industries that deal a lot with the design and the building of missiles, spacecraft, aircrafts and many other. Their work is in manufacturing, industries or analysis and design, federal government agencies, business services, electrical firms, engineering services and many others. As one of these professionals you might get into development and research and in the federal government.

The majority of these professionals have the standard working hours of 40 hours per week but with deadlines and terms to be taken into consideration their working hours might overpass the established schedule. The setting for most of the aerospace engineers is indoors, inside of an office while in other cases due to the type of the projects the work that is required might be outdoors.

Another decisive factor is that aerospace engineers that have the duty to direct the projects must spend many times extra hours in order to assure a proper monitor of the progress, and also the fact that the design will fulfill all the requirements and that the deadlines are met. With other words, the schedule of an aerospace engineer is a full-time schedule.

Aerospace engineers are specialized in working with sophisticated computer software that they usually use for design, and create models as well as for simulating tests, evaluation and training.

Pros and Cons of Being an Aerospace Engineer

Every work has its pros and cons, and the road to a career of success is to know ahead what you can expect from that job. The work of an aerospace engineer involves being an aid to the community and also being capable of building aircrafts. Another pro in this job is the high accomplishments that come once with the satisfaction that results from the job.

As an aerospace engineer, you can also be motivated by the good payment and a job that does not involve a life of getting bored but rather will involve new cool things such as building missiles, aircrafts, spacecraft and other governmental high-tech projects.

On the other hand when it comes to the cons in this job, are linked with the deadlines that come with the projects. Stress is one factor that often has a negative impact at the working site. As an aerospace engineer, you might have to move and search around the country for a job in this particular field. Many job opportunities arise only in certain parts of the country leading to the fact that you’ll have to move there and uproot there your family.

In the United States, the average income of an aerospace engineer is usually estimated at $107,710 per year. The salary tends to start in this profession from $66,112 per year or even lower and goes up to $155,243 per year. The figures usually depend on several important factors such as education, years of experience in this field, the geographical location, industry in which you are hired as well as the company size.

The years of experience often are of great impact since the more years you have on the field the higher will your income will get. For instance, the first 5 years of this career can lead to a median income of around $70,010 per year while working for more than 10 years will lead to an estimated income of $84,010 per year. Those professionals are working up to 20 years the median earnings are estimated at around $101,010 per year while the veterans that already have over 20 years of experience can expect to take home around $127,010 per year.

According to the state, those who found work as aerospace engineers in Virginia can expect at an income that usually reaches at $126,324 per year while in California the earnings tend to reach at $112,812 per year. In Colorado, the earnings of an aerospace engineer are estimated at around $123,014 per year while in Florida the salary reaches at $97,862 per year. The lowest income can be found in Utah where the offered income tends to reach only at $76,232 per year.

Salary of an Aerospace Engineer in 2016

The salary of an Aerospace Engineer in the US, in 2016 is estimated to be at an average that usually reaches up to $85,010 per year lower or higher. Their incomes vary depending on several reminded influential factors. The economic flux will also affect the regions and the areas in which these professionals are working. The job outlook for these specialists reported to the average for all occupations has a slower growth average than usual.

Aerospace Engineer Salary in Canada, Australia and the United Kingdom

The entry level income for these professionals is very different also according to the company size, location, industry, and education. In the US, the years of experience and the level of education will make a difference.